Hi Everyone! I've moved. My two new blog addresses are:

http://thestorytemplate.blogspot.com
Posted by Amy Deardon at 1:35 PM No comments:

I'm a skeptic who came to faith through studying the historic circumstances surrounding the death of Jesus. My first novel, released January 2009, is an adventure about a small military team that travels back in time to film the theft of Jesus' body from the tomb. It will hopefully challenge you no matter what your beliefs!

This blog is an eclectic, hopefully thought-provoking and winsome mix of writing, religion, science, and other subjects as they catch my fancy. I'm eager for you to join in!

Check out my website at www.amydeardon.com
Posted by Amy Deardon at 6:50 AM No comments:

Dwight Swain first described these. MRUs are the smallest units by which a story is told, and when these are consistently used correctly your story will powerfully draw in the reader.

There are two parts of the MRU, the stimulus (cause) and the response (effect), that string together to form a narrative.

The stimulus is external to your character. In other words, it is something occurring in the environment that could be seen, heard and/or touched by any character in that location. It should be significant to your POV character so that he will feel he needs to respond. Some examples of a stimulus might be a dog breaking its leash and viciously growling as it runs toward the POV character, the hard-won note with secret information fluttering from the POV character’s pocket, or the POV character’s love interest whom he thought hated him unexpectedly kissing him.
The POV character is not written as the subject of the stimulus because this distances the reader from your character. In other words, you would say, “The drawer pinched Sharon’s finger,” not “Sharon felt the drawer pinch her finger.”

The response describes your character’s reaction to the stimulus, and must occur after the stimulus. In other words, you wouldn’t say, “Sharon yelped and pulled her hand away after the drawer pinched her finger” because this is out of order. First Sharon feels the pinch, then she reacts. This may sound obvious, but it happens more frequently than you might expect. Although the reader may not identify the reversed order, he will feel like something is off.

The response has four components that must always be in the correct order. These components are: emotion or sensation, reflex action, rational action, and speech. For example:

A loud crack ripped through the canyon. (stimulus) Jack started (emotion/sensation) then looked up in the direction of the sound. (reflex) The careening boulder was almost on him and he grabbed the bush to pull himself out of the way. (rational action) “Too close,” he said. (speech)

The boulder thumped where he had stood a moment before.(stimulus) He felt the ground vibrate (emotion/sensation) and shivered. (reflex) He hadn’t escaped yet. (rational action)

Most of the time you will not use all four of these response components. When you use fewer than four, just make sure that the ones you do use are in the correct order.

When do you use all of these reaction components at once? Since these components intensify the reader experience, you use all four when you want to increase tension or else to highlight something important.
Posted by Amy Deardon at 2:43 AM 5 comments:

While cleaning out the basement, I found a VCR of Air Force One. This movie came out in 1997, a handful of years after the fall of the Berlin Wall. Here's a quick synopsis of the story:

The President, James Marshall (played by Harrison Ford), over enormous political pressure has coordinated the capture of the dangerous dictator of Kazakhstan. Ivan Radek is waging a civil war with the newly liberated Russian bloc countries and has nuclear weapons. In Moscow Marshall states a new, strong, "no tolerance" policy of the USA for any terrorists because "it's the right thing to do."

On the way home, a pro-Radek team of terrorists hijacks Air Force One and herds the hostages into a locked conference room, demanding the release of Radek. Marshall escapes capture and sabotages many aspects of the terrorists' plans, including the parachuting release of most of the hostages.

Marshall eventually defeats the terrorists, but since the pilots are all dead must now fly the damaged plane with low fuel out of the enemy region before another attack by air commences...

Let me say first that this is a violent movie, so watch it at your own risk. However the violence is not gratuitous but represents a realistic portrayal of how terrorists might deal with their mission, which I find instructive and a good reminder of what "bad" people are willing to do to get their way. It raises some thoughts: how might I behave in that situation? Would I be able to stand up to that evil?

It was refreshing to watch such a positive portrayal of strength and goodness in the United States and with the military. I've missed that. Marshall, we're told, is a Medal of Honor Winner and "flew more rescue missions in Vietnam" than anyone else under a high-ranking officer's command. Marshall was brave. Marshall was strong. Marshall held to the good despite enormous pressure to bow to the easy.

The military pilots and others who assisted with the rescue showed amazing feats of training, discipline, and selfless courage. Glenn Close, who played Vice President Catherine Bennett, was another strong leader. There were many heroic acts from the nameless characters -- the secret service men and other staff who stood in gunfire to guard safe passage for Marshall and others, others confronting and fighting the terrorists to protect the hostages. It was inspiring.

Wow, wow, wow. It seems lately that there is so much negativism and corruption permeating our country, leading to fear and despair in the American people.

James Marshall, where are you?
Posted by Amy Deardon at 2:36 AM 2 comments:

I just heard about a "Global E-Book" contest sponsored by Dan Poynter's organization. Entrance fee is $59 (discount for multiples) and deadline is June 30th. Categories include covers, multiple nonfiction topics, and multiple fiction topics. You can check it out at http://awardsforebooks.com/

I don't know any more. Investigation is key since $$ is involved. Good luck if you enter!
Posted by Amy Deardon at 2:42 AM No comments: 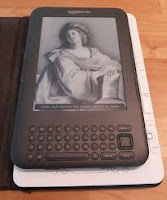 Amazon recently compiled sales data from the first five months of 2011 of both printed and e-books to come up with its "Most Well-Read Cities in America." Here they are:

It's interesting to note that there are some strong college cities in this list, including Cambridge MA. Cities, especially college cities, might be expected to have some good bookstores in the area. Unfortunately there are no figures comparing brick-and-mortar store sales to online store sales, but it's not hard to imagine that a creeping change of how books are sold and how people read is going on. Just this month at Amazon's yearly meeting, Jeff Bezos announced that Kindle books were outselling print books on Amazon. Is this a good thing?

I love my Kindle. I love being able to almost instantly have the new book I want to read -- instant gratification. At the same time, a) I can spend a lot of money if I'm not careful; and b) as wonderful as the Kindle is, the e-books still have disadvantages over DTBs (dead tree books). I can't share the book easily (although Amazon is instituting some sort of lending policy), and I wonder what would happen if my Kindle died. Well, my books are stored "in the cloud" but I'd still have to purchase another Kindle, and I'd lose my PDFs and other documents. DTBs also have problems, most notably that they take space to store.

One can't stand in the way of an oncoming train. What do you think of changes in publishing?
Posted by Amy Deardon at 2:23 AM No comments:

Definition of a Liberal

I don't know a better term to use. By "liberal" I mean a politician who believes the rules don't apply to him, but doesn't mind creating and imposing them on others. No disrespect intended to other politicians.

Here it is, the definition of a liberal:

Someone who doesn't mind what you do, as long as you're mandated to do it.
Posted by Amy Deardon at 2:25 AM No comments: