Author Interview Part 2: When the Sky Fell by Mike Lynch and Brandon Barr

I’m honored today to visit with two writers who have crafted a magnificent book! You can find their novel, When the Sky Fell, online at amazon HERE and spotlighted on the publisher's site HERE.

This interview with Mike and Brandon is the second and final part; the first part was posted Wednesday. What impressed me so much about Wednesday's interview was the sheer persistence Mike and also Brandon needed to get this book imagined, written, and completed. Truly an inspiration!

Today's interview will focus on agents, editors, publishers, and marketing. Thanks so much, guys! 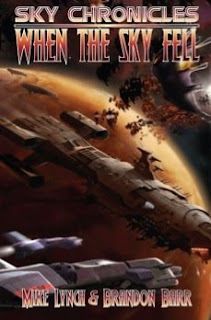 When the Sky Fell is about one man’s journey who must overcome his past to save humanity’s future.

Set in 2217, Commander Frank Yamane is the captain of the stellar cruiser, Corona. Having been in the military for most of his life, he has experienced a number of tragedies, including the death of his beloved wife, Liana. But it is these same experiences that have also prepared him for the day when the survival of humankind is at stake.

When an armada of 1000 Deravan vessels is detected at the edge of the solar system heading straight for Earth, Star Force Command sends every available ship it has to make a stand at Mars. Outnumbered, outclassed, and outgunned, their plan to stop the Deravans fails, leaving our world at the mercy of an enemy that has shown them none.

Faced with the planet’s imminent destruction, Commander Yamane has no choice but to seek the help of the Antarans, an alien civilization he defeated in a war a decade before. Though they have every reason not to come to Earth’s rescue, he sets forth on a desperate journey to the Antaran home world, knowing that the survival of mankind is hanging by a thread. 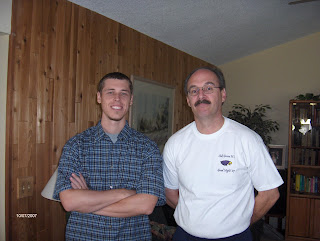 NOTE: my questions are in white, Mike's answers are in blue, and Brandon's are in green. In the photo, Mike is on the right, Brandon on the left.

How did you find a publisher for your book? Do you have an agent?

ML: Finding a publisher was a long a laborious process for the two of us. I had tried on my own for several years, but got nowhere. At the same time I also sent out query letter after query letter to different Christian publishers, but they too weren’t interested in the book. After Brandon came on board, we sent out the newly revised manuscript and proposal to different Christian publishers, but the results were the same. Realizing our story just wasn’t going to be accepted in Christian literary circles, Brandon and I trimmed down the overtly Christian elements and made the story more allegorical in nature. We then focused our attention on secular publishers that specialized in sci-fi and fantasy. And finally one day, I received a letter from Silver Leaf Books, saying they were interested in publishing the story.
When Silver Leaf sent us the contract to publish the novel, Brandon and I realized very quickly we were in over our heads, and so decided to sign with an agent. Our big concern was signing something we didn’t fully understand, only to find out later we would get very little compensation for our books, which has been known to happen. After checking out a few places, we finally signed on with Joyce Hart of the Hartline Literary Agency.

What are you working on now?

ML: Brandon and I are currently working on the sequel to When the Sky Fell, tentatively entitled, “When the Sky Burned.”

BB: It’s going to be action packed! Can’t wait to get out and available for people to read.

1) Would you consider science fiction a difficult genre to break into for the Christian market and/or the general market? 2) Do you look at the emergence of new small publishers as hopeful? 3) What do you think are the biggest obstacles to getting published?

BB: 1) Sci-fi is embraced by the secular market. So if your story isn’t forcefully Christian, send it to the secular market. 2) Small publishers are a foot in the door for many authors. And some bestsellers come out of them. They’re on the look for undiscovered talent, and our in fact beginning to rival the big publishing houses. 3) The biggest obstacle to getting published is depression, and getting down on yourself. You see all these rejections and you feel like a failure. Just remember (according to Chicken Soup for the Writers Soul), Louis L’Amour received 350 rejections before selling his first story, and Jack London received 600. Just because you’re rejected, doesn’t mean your writing stinks. But I bet Jack London’s first story wasn’t nearly as good as his 600th!!

ML: Though some Christian publishers have taken a chance on a science fiction story now and again, overall, they remain reticent to embrace this genre. As has been told to me a number of times, they believe the audience just isn’t big enough to take the financial risk. And so they stay with genres that have proven themselves more economically viable.

The good news is that things are changing. Jeff Gerke just launched Marcher Lord Press, an online publishing house that specializes on science fiction and fantasy. Also, a number of Christian groups, bloggers, and forums have popped up all over the Internet that are committed to making science fiction and fantasy just as viable a genre as prairie romances and political thrillers. In time, we believe today’s reading audience raised by Star Trek and Star Wars will force mainstream Christian publishers to adjust their promotional strategy, and start offering many more titles that reflect this genre.

In my opinion, the biggest obstacle to getting published is that there are many more writers than there are slots for books. It has always been this way. Let’s say a publisher gets 4,000 queries from unpublished authors in a given year, but they only publish 2 titles from that group; 3998 writers are going to be disappointed. You have to keep going no matter how many publishers pass on your story. Like I often say to people, “It’s easy for ninety-nine publishers to say no, but it only takes one to say yes.”

What are your best pieces of advice for other writers?

BB: After you’ve written one novel, write another, and another, and keep writing them. If you love storytelling, then you’ll have the strength to persevere through rejections. Just keep writing! One of my favorite authors wrote fourteen books before he had his first one published.

ML: I couldn’t agree with Brandon more. Keep writing no matter what. Only about 1% of novels ever get published. That’s a dismal statistic, but it is just the way it is. You really have to believe in your project to beat those kinds of odds. If an editor tells you where your work falls short, listen to him/her. It’s like gold to get a critique like that. It’s also important to develop relationships with other writers. Networking cannot be underestimated. I also encourage would-be writers to go to writers conferences. You are sitting at the feet of people who have gone ahead of you, and will tell you what the business is like. While there, you will also have a chance to sit down with agents and editors and pitch your story in a way that could never happen with a query letter. Nothing speaks louder than the passion and enthusiasm you have for your work. In the end, keep sending out your stories. Know that the rejection letters will come, but you have to stay committed, until you find that one publisher that loves your novel as much as you.

What have you been doing to get the word out about your book? Where can people go to find out more, and to purchase your book? If they like it, what can they do to help you?

ML: Brandon and I have been doing as much as time allows—we have our own websites to promote When the Sky Fell (www.mikelynchbooks.com and www.brandonbarr.com), we’ve joined a number of online groups committed to promoting Christian sci-fi, we’ve had book signings, set up author appearances at book stores, sold copies to friends and family members, sold copies at work, we’re hoping to have a table set up at the Spirit West Coast Christian concert, we’ve done radio interviews, blog interviews, and have spoken to a number of students at schools and libraries.

The best way for people to help us is to help us promote the book, such as what you are doing. The more we get the word out, the better our chances of getting people’s attention.

BB: If you’re into Christian sci-fi and want to see more, tell your like-minded friends! The more people who realize there is actually Christian sci-fi (and fantasy) available, the more demand there will be for this genre. Mike and I hope to be writing stories for a long time to come and we hope to make a lot of friends with readers starving for thrilling, adventurous sci-fi created from a Christian worldview.

ML: I’d like to thank you for giving us this opportunity to talk about the book and promote it to your readers. We really appreciate this.

BB: Thanks, Amy, and may God bless your own writing endeavors!

Hi Amy - You asked what I thought about back-up methods for files. My idea of back-up is not another place on line, but just putting everything I care about on a flash drive or on discs.
Now I'm gong to read this interesting looking post you have put up!

Lots of good stuff here, Amy. Lots to ponder, too.

One percent of novels are published?

Hey Amy,
Thanks for sharing me and Mike's story :)

And I also added your blog to my Kindred Spirits list!

Thanks for spotlighting these guys, Amy. I really like these guys and they are so inspiring. I'm eating this up :)

I've got my copy of When the Sky Fell! Everybody go order yours :)