Rejoice in the Lord always; again I will say, rejoice! (Phil 4:4, NASB)

During the early 1600s the Puritans (so named because they wanted to restore Christianity to its "ancient purity") relocated from England to Holland, before deciding they would sail to the New World to establish their own colony where they could worship in peace and without secular pressures and temptations.

They sailed from Holland back to England, and were joined by farmers and tradesmen. On September 16th, 1620, the small Mayflower set sail from Plymouth, England, with 102 passengers seeking a new life in America. (The Mayflower originally had 90 passengers, but when a second ship the Speedwell couldn't sail, 12 of those passengers were added). 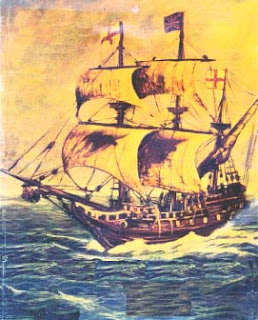 On November 19, 1620, the land of the new world was first sighted. Two days later the ship anchored in Provincetown Bay, Massachusetts, far north of the Virginia colonies for which they had been aiming.

Although the passengers debated going south, they finally decided to stay where they were for the winter. Before setting foot on the shore, on November 21st, 1620 (November 11th according to the Julian Calendar, 10 days behind the Gregorian Calendar), 41 of the Pilgrims and other colonists signed the Mayflower Compact that read: 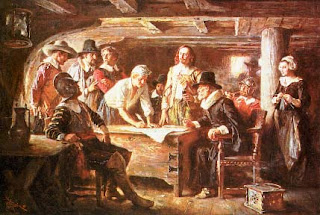 In the name of God, Amen. We whose names are underwritten, the loyal subjects of our dread* Sovereign Lord King James, by the Grace of God of Great Britain, France and Ireland, King, Defender of the Faith, etc.

Having undertaken, for the Glory of God and advancement of the Christian Faith and Honour of our King and Country, a Voyage to plant the First Colony in the Northern Parts of Virginia, do by these presents solemnly and mutually in the presence of God and one of another, Covenant and Combine ourselves together into a Civil Body Politic, for our better ordering and preservation and furtherance of the ends aforesaid; and by virtue hereof to enact, constitute and frame such just and equal Laws, Ordinances, Acts, Constitutions and Offices, from time to time, as shall be thought most meet and convenient for the general good of the Colony, unto which we promise all due submission and obedience. In witness whereof we have hereunder subscribed our names at Cape Cod, the 11th of November, in the year of the reign of our Sovereign Lord King James, of England, France and Ireland the eighteenth, and of Scotland the fifty-fourth. Anno Domini 1620.

*Note: The "dread sovereign" referred to in the document uses the archaic definition of "dread," meaning awe and reverence (for the King), not fear.

Scouting parties identified Plymouth as a place to settle, and on December 30th 1620 the pilgrims disembarked here. Governor William Bradford, describing the first landing of the Mayflower at Plymouth that December, writes:

Being thus arrived in a good harbor, and brought safe to land, they fell upon their knees and blessed the God of Heaven who had brought them over the vast and furious ocean, and delivered them from the perils and miseries thereof, again to set their feet on the firm and stable earth.... What could they see but a hideous and desolate wilderness, full of wild beasts and wild men--and what multitudes there might be of them they knew not. The season it was winter, sharp and violent, subject to cruel and fierce storms. What could now sustain them but the Spirit of God and His grace?

The settlers built log huts. Weakened by the long journey, cold, lack of food, and disease, nearly half of the settlers died that first winter. They buried their dead at night so the Indians wouldn't observe their weakness. 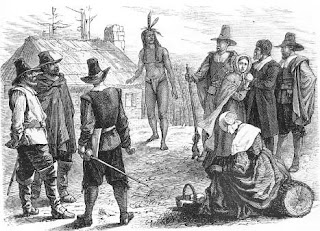 In March of 1621, an Indian named Samoset who knew a few English words visited and then introduced the Pilgrims to Squanto, an Indian who had lived in England. Squanto brought corn, and taught the pilgrims how to adapt to the new environment. 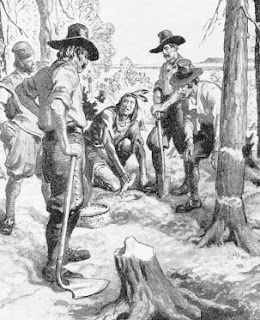 In the autumn of 1621 Governor William Bradford set aside a day for public Thanksgiving to God in gratitude for the blessings already received. Chief Massosoit was invited, and brought 60 braves, 5 dressed deer, a dozen wild turkeys and popcorn.

On this day, we are hopefully fortunate enough to sit in our warm homes surrounded by dear ones and enjoying a groaning table full of food. Let us not forget the great blessings and privileges we have and perhaps take as a matter of course. Make a list. Here are a few things I'm grateful for:

God, life, family and dear friends (both here and gone), and the opportunities to pursue dreams

As I read this over, I'm suddenly realizing the things I'm grateful for are the values set forth in the Constitution -- wow, what inspired geniuses they were who set up this country, starting from the Mayflower Compact on up.

I'd love comments to hear what you are grateful for, and how you celebrate Thanksgiving.
Posted by Amy Deardon at 2:44 AM

Hi, Happy Thanksgiving! I hope you will join me over at Grace Talk With Daveda in Touched By The Fathers love. Please come on over and check it out!

Being Loved By Him, With You,
Daveda