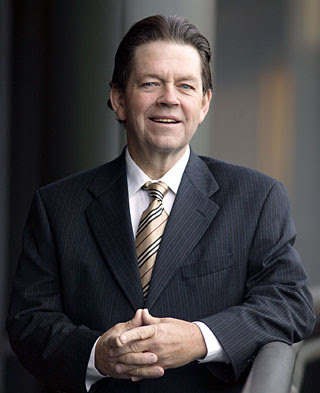 Arthur Laffer is an economist whose "supply side" theories guided Ronald Reagan's economic policies in the 80s. He wrote an editorial in The Wall Street Journal on Monday June 7th 2010 about the future of the American economy that is cautionary and worrisome.

His thesis is that the tax hikes that will occur in 2011, due to the expiration of the Bush tax cuts (and many new taxes) will probably cause coporate profits to tumble and the stock market to "collapse." Some of the coming tax hikes that will hit us Americans include:

* the highest federal personal income tax rate will go from 35 to 39.6 percent;

* the highest federal dividend tax rate will increase from 15 to 39.6 percent;

* the capital gains tax rate will rise from 15 to 20 percent;

Laffer says that “Tax rate increases next year are everywhere.” He thinks that the coming hikes, along with the prospect of rising prices, higher interest rates and more regulations next year, are causing businesses to shift production and income from 2011 to 2010 to the greatest extent possible.

Laffer is the originator of the "Laffer Curve" that theorizes that under certain circumstances decreases in tax rates can result in increased tax revenues.

Laffer observes that Reagan's delayed tax cuts, which were passed under the Economic Recovery Tax Act in 1981 but didn’t take effect until 1983, were the mirror image of President Barack Obama's delayed tax rate increases. In 1983, the economy took off like a rocket, with average real growth reaching 7.5 percent in 1983 and 5.5 percent in 1984. Mr. Obama's experience with deferred tax rate increases will be the reverse.

Laffer predicts that the USA economy if it continues along current policies will collapse in 2011.

"Incentives matter," Laffer says. “If you thought deficits and unemployment have been bad lately, you ain't seen nothing yet.” If the government taxes people who work and pays people not to work, the result will be that fewer people will work.
Posted by Amy Deardon at 2:40 AM

I admit I do not get into political discussions. Ever. It's not an area I have any expertise on. BUT, how anyone can NOT see that our country is in financial trouble is beyond me. And further, even my kids--who are elementary age--have been able to gather just from bits and pieces they've caught on the news that it is TAX increases--which are the OPPOSITE of what was promised to us--are the problem. It's enough to make me sick.

Thanks for sharing, Amy, and for having the backbone to post about things people need to hear.

It's sad our country's philosophical approach to fixing problems is so upside down...

That's pretty scary to imagine an economic collapse by 2011...I think I'll continue to rent instead of buy a house! No debt!

Here are some videos on the Laffer curve from the Cato Institute's Dan Mitchell that you might find informative!

Anonymous, thank you! These videos are clear and helpful.

Anonymous, thank you! These videos are clear and helpful.