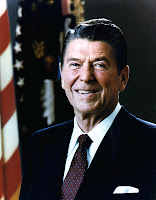 The 80s were an interesting and largely optimistic time in America. Remember Michael Jackson's Thriller and Big Hair? The bombing of the Lebanon barracks? Princess Di? AIDS? The USSR as the USA's major nemesis? After Jimmy Carter people felt proud again to be Americans. A lot of this was due to Ronald Reagan. Who can forget his line at the Brandenburg gate of the Berlin Wall separating West and East Germany: "Mr. Gorbachev, Tear Down This Wall!"

At his funeral over 100,000 people filed directly by the casket in the rotunda of the Capitol. He was eventually buried at his presidential library in California.

During his presidency Reagan was witty and perpetually befuddled his detractors. He was shrewd as he dealt with other nations. He led the USA confidently from an economically depressed and politically weak country to usher in a booming economic recovery and the defeat of the Soviets. The last few lines of his final address to the nation, on January 11 1989, were:

And how stands the city on this winter night? More prosperous, more secure, and happier than it was 8 years ago. But more than that: After 200 years, two centuries, she still stands strong and true on the granite ridge, and her glow has held steady no matter what storm. And she's still a beacon, still a magnet for all who must have freedom, for all the pilgrims from all the lost places who are hurtling through the darkness, toward home.

We've done our part. And as I walk off into the city streets, a final word to the men and women of the Reagan Revolution, the men and women across America who for 8 years did the work that brought America back. My friends: We did it. We weren't just marking time. We made a difference. We made the city stronger; we made the city freer; and we left her in good hands. All in all, not bad -- not bad at all.

And so, goodbye, God bless you, and God bless the United States of America.

He loved this country, and he imbued many with his vision. Ronald Reagan, thank you.
Posted by Amy Deardon at 2:06 AM

However many or few people would agree with me, I've said often that Ronald Reagan was the greatest U.S. president of the 20th century.